While working on a client’s project we were confronted with the following task - to generate e-flyers from images uploaded by a user in advance, and add formatted text to it.

Given that our client’s entire infrastructure was based in Amazon Web Services (AWS), we were limited to the following options to complete the task:

Let's quickly go through these three options and shed some light on the choice we made:

Needless to say, price is an important factor here, and reducing the clients’ costs is of utter importance to us. That’s why we decided to calculate and compare the prices of different sample loads and decide what would be best approach:

Bear in mind that:

The price differences between the three options speak for themselves, even if we don’t include the infrastructure configuration costs. So the obvious choice here is the Lambda function.

* In order to calculate these prices, we used the information from the following websites:

So, we have chosen the infrastructure for our task. The next step is to think how this task should reach the front-end, where the users upload their images and create e-flyer generation processes. Surely, most of you would say that the obvious solution to this is Amazon Simple Queue Service (SQS). Generally speaking, this service is indeed perfect for the purpose, however, due to the specifics of our project, we’ve chosen another approach.

Our front-end uses Laravel, which in turn uses cron. The latter performs different tasks every minute, i.e. we have a resource that is working anyway. So we decided to simply add one more task to the current cron job, which in turn would directly invoke the Lambda function with the required parameters. This may seem like the wrong architecture solution to some of you, but we have a different opinion. Here are some of the reasons why we chose this approach for the project:

So far, so good – we have chosen the infrastructure and the way of communication between the systems. We only have to write the Lambda function itself. We decided that the most appropriate way to do it is with Python. Why? Because there are great Python image processing libraries, the code is easy to write and maintain, and also easy to debug.

So from now on, the easiest way to proceed is to simply put in the code we need and let the magic happen. It sounds as easy as pie, but we had several issues to solve first:

We solved the first issue by creating a Lambda layer for storing the packages we need. Actually, this isn’t as simple as it seems, because if some of the libraries you use are dependent on the operating system they are working on, they must be compiled on this specific OS. And as Lambda functions use AWS Linux, there are two ways to compile such libraries:

Another thing worth noting is that when you use Lambda Layer(s), Python may not find the libraries you need. So, you should add a variable PYTHONPATH with value /opt/ to your Environment variables.

In regards to the problem with accessing the database - if your database is created in an Amazon Virtual Private Cloud (VPC) with no access from the Internet, you will also need to configure the access to your VPC from the settings of the Lambda function (you can check https://docs.aws.amazon.com/lambda/latest/dg/configuration-vpc.html for more details on how to do this).

So, the only thing that’s left is the issue with the access to the images, and we decided to use Amazon Simple Storage Service (S3). On the one hand, this would allow serving the images directly to the users’ browsers without causing any load on our servers, and on the other, we would have access to them from different applications without having to complicate the application code unnecessarily.

And finally, here are the exact steps to create a Lambda function with the AWS web console: 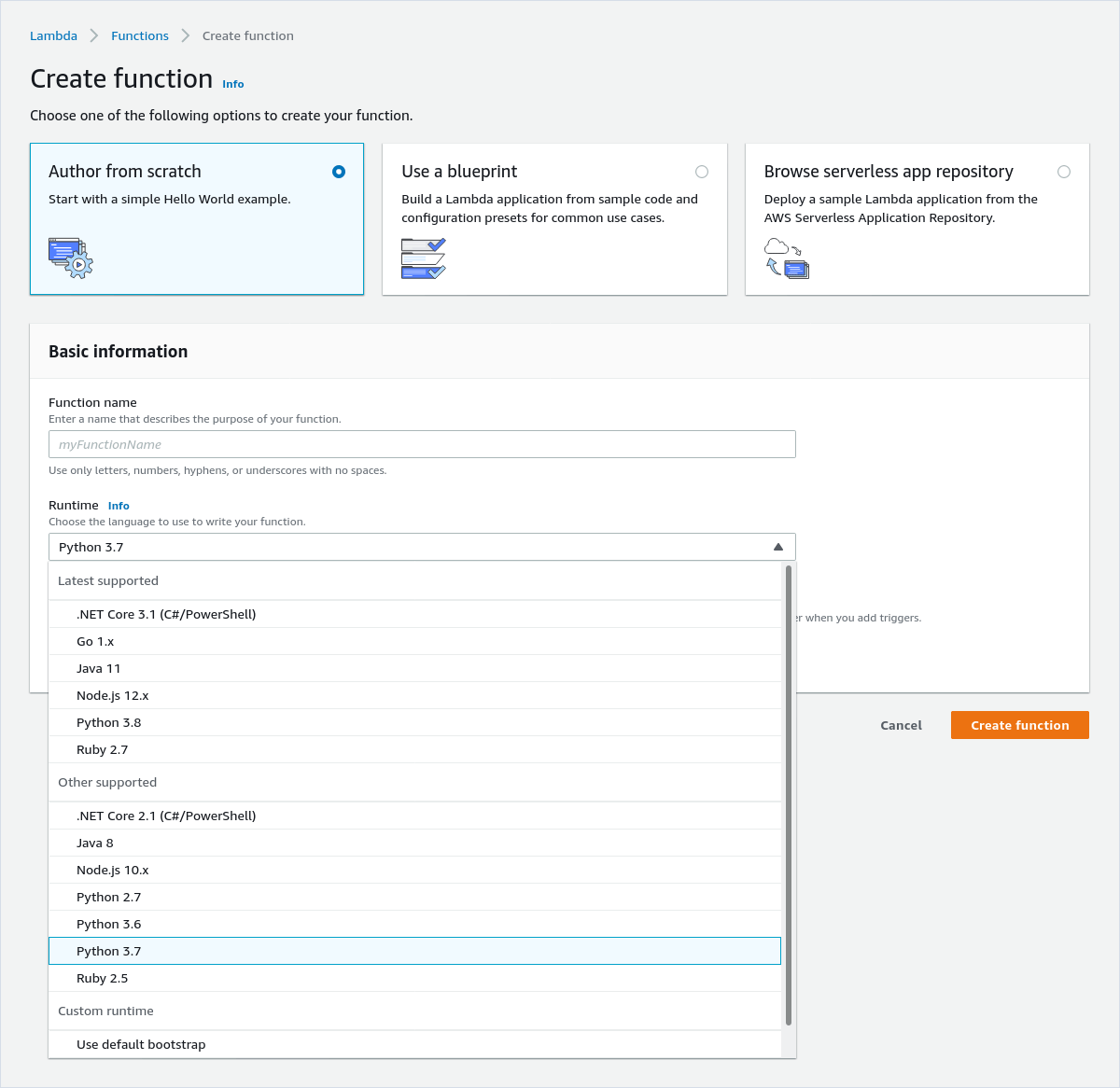 2. Choose the programming language and the name of your function. In case you wish to use a specific role of the function, select ‘Choose or create an execution role’

3. Add the respective variables which will be used by the Lambda function code:

Choose edit environment variables from the page of the function

Add the respective variables from the page which will load 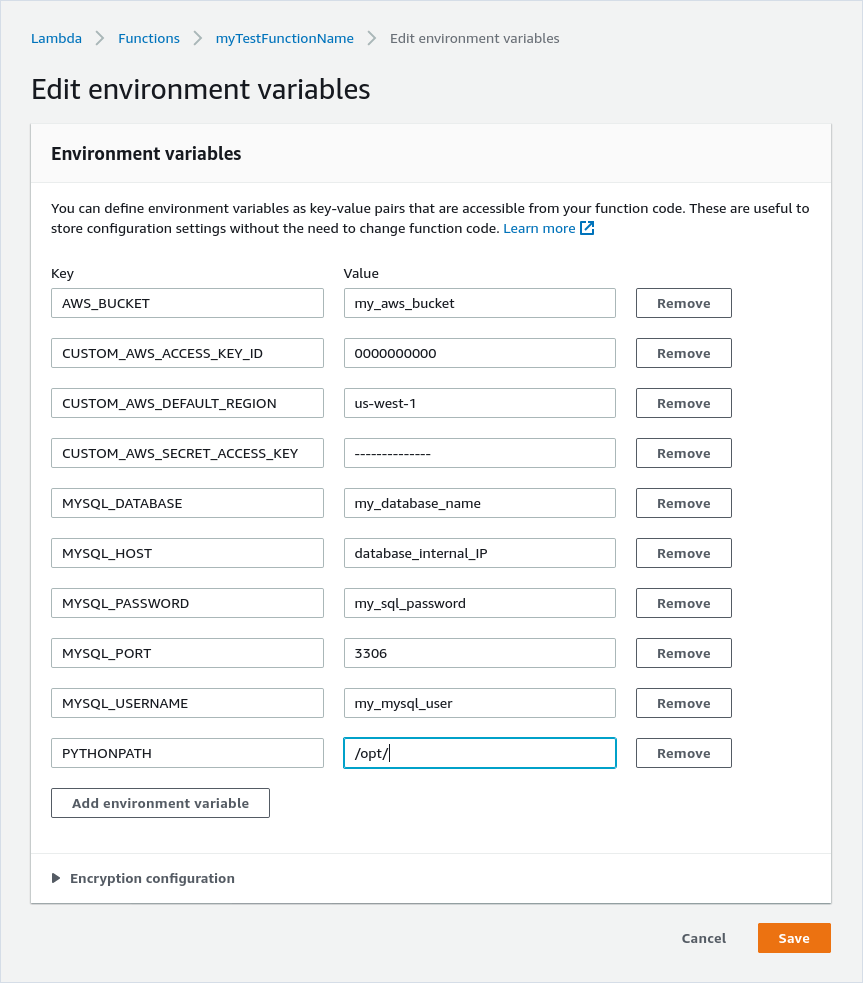 4. In order to connect to instances in some of the virtual private clouds (VPC) you use, you should add VPC and follow the instructions on the webpage.

5. Then, you may use a similar code to connect to the AWS resources database. To this end, we use Python packages pymysql and boto3.

Whereas the boto3 package doesn’t require any further actions, the pymysql requires installation. So, if you are going to use it in more than one function, you may configure it as a Layer. In order to do that, use the button ‘Create layer’ from the Lambda menu -> Layers.

Then, in the page which will load, you should fill out the name of the Layer, the environment in which it will be used (in our case - Python 3.7), as well as a description and a license, if you wish. Do have in mind that packages larger than 50Mb have to be uploaded in S3 beforehand. 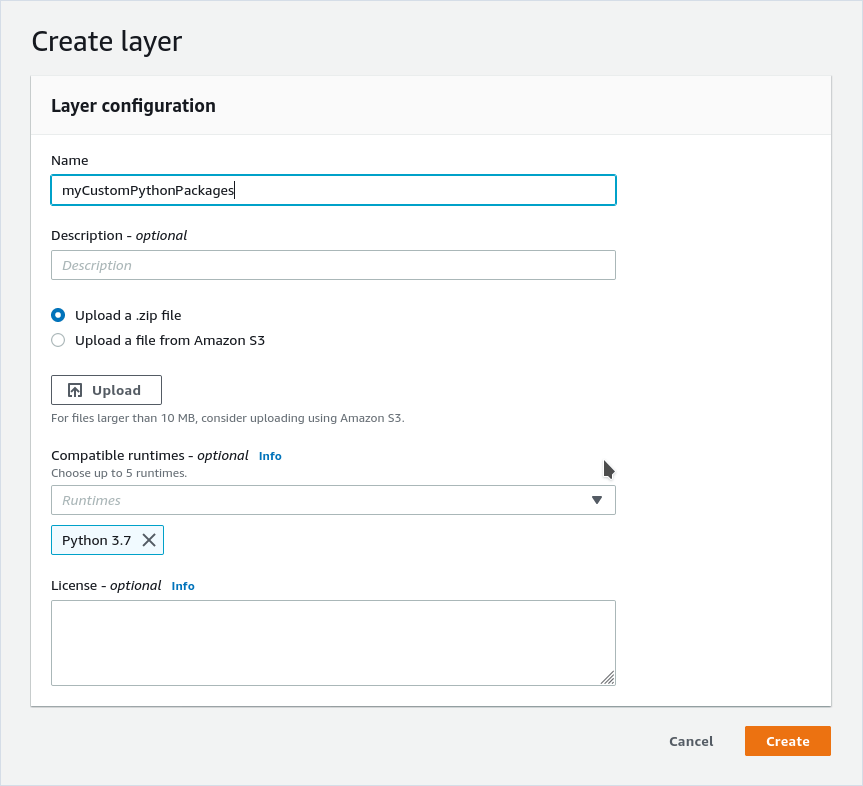 Then, from the function you configured, use the Layers button to add the layer you’ve just created:

7. And finally, here is how the new Lambda function looks like: 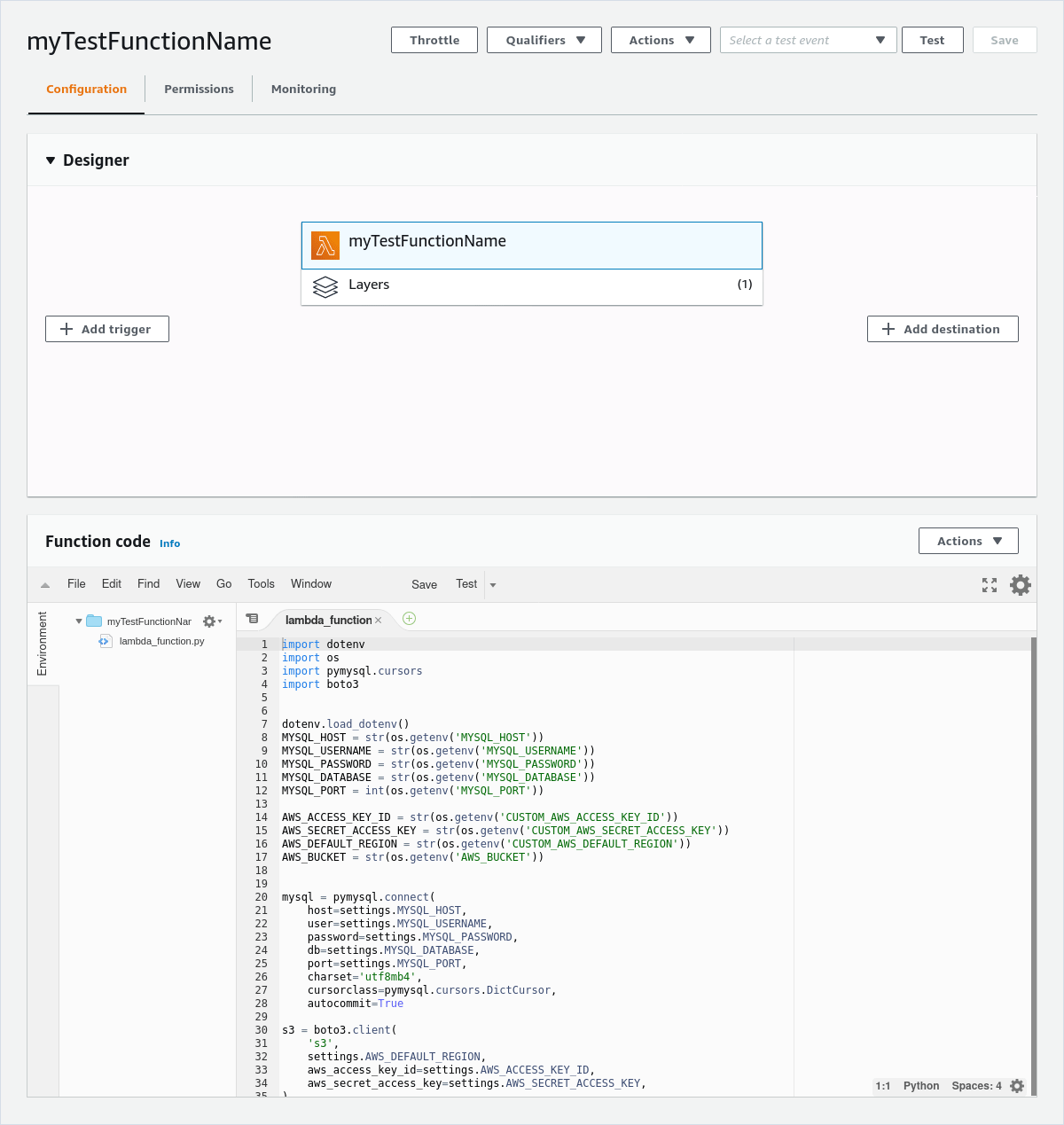 The example presented above is of course simplified and incomplete – after all, it’s intended to provide you with a general idea of how to generate images with AWS Lambda and the steps you need to follow.

In order to use your new function, you’ll need its ARN (Amazon Resource Name), which is located at the upper end of the page:

We should also note that the way to call the function will vary, depending on the environment in which you will use it.

Most certainly, there are other ways to execute this task. In our view, however, the way we did it could be described as an optimal and stable solution that meets the requirements of our project and minimizes the infrastructure costs. We use it in production for more than four months now, and we haven’t encountered any problems, even though the workload is constantly increasing, as we expected.

Last but not least, we haven’t reached the free tier limits for the AWS services used for the time being, so the generation of e-flyers in our project is still free.